Themed “Together we move South Africa forward”, it is an annual initiative that shines a light on all modes of transport … and cycling is increasingly becoming a key part of the equation.

To do our part in this worthwhile endeavour, the Bike4All team got stuck into the following projects:

Every Friday, the Bike Busses left from Gugulethu and Claremont to the CBD and the Bike4All team arranged bicycles for those interested in trying it out. We received really encouraging interest from people travelling in from Gugs and they wanted to purchase the bikes. And that sparked the idea of arranging a Transport Month special of R500 to make the bike even more affordable. We ended up selling over 20 bikes for the month.

INSPIRING CITY OF CAPE TOWN INTERNS
Two young interns who work for the City of Cape Town started a ride through the city every Friday during their lunch break to show that you can ride a bicycle easily and safely through the streets of the Mother City. We supported the group with Bike4All bicycles to use for their ride. After all, it’s quicker to use a bicycle than get in a car and search for parking in the city centre!

AND INSPIRING CITIZENS
It’s not only organisations that buy and donate our affordable Bike4All bicycles, but individual people approach us too. Here were a few who have adopted this eco-friendly,, healthy and cheap mode of transport:

Ntskelelo Blaai
“I am so happy to be one of people who are riding the bikes in the city! It relaxes my mind … you just meditate while you riding. I ride to work and the church. It’s also great exercise for people like me who don’t have the time – my work hours are tiring. Riding a bike is helping me lose weight wait and am so happy for this. Plus, I don’t have to worry about the increases in the petrol price. I am 100% happy and committed.” 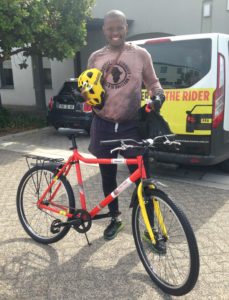 Aniela Batschari
“Thank you so much for the bike. I am so happy! Before I came to South Africa in 1997, I never owed a car and always used my bicycle in Berlin, Germany. I bought my very first car when I moved to Cape Town. And then got so used to it that I always move around by car and the thought of using a bicycle as a mode of transport vanished more and more. Then I joined WomenOnBikes with Open Street in August! I was so inspired to go back onto my bike and no longer make excuses that traffic is too much, wind too strong, roads too hilly, driver’s too ignorant. I’ll now pedal much more!” 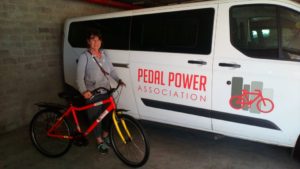 Jessica Canda
“I am so happy to finally have my own bike – I will definitely cycle to work and keep my body in good shape. Once again thanks for the initiative!” 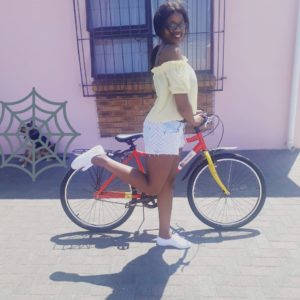